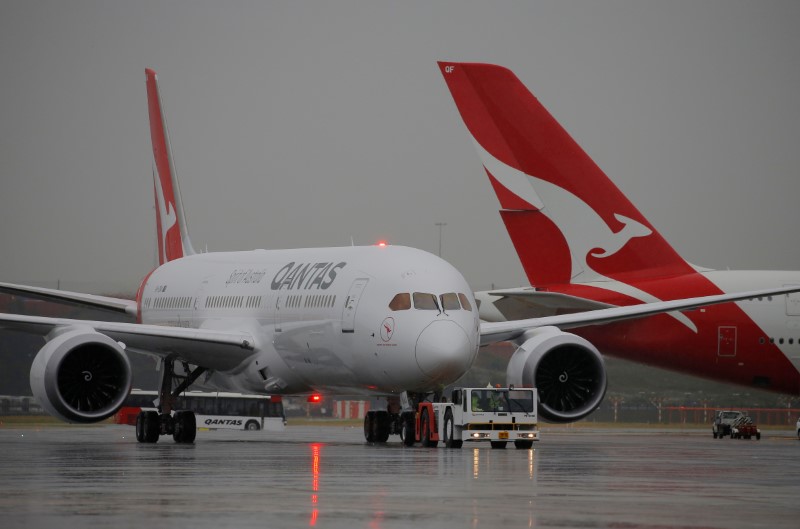 SYDNEY (Reuters) – Qantas Airways Ltd (AX:QAN) on Wednesday secured A$1.05 billion ($627.8 million) against its aircraft fleet to help it ride out the coronavirus crisis, sending shares up 30%, as airlines in the Asia-Pacific region sliced away capacity and jobs.

The Qantas financing of seven Boeing Co (N:BA) 787-9s for up to 10 years at a 2.75% interest rate showed there is still low-cost funding available to airlines with strong fundamentals, even as the global industry calls for more government aid to help replace an estimated $250 billion of lost revenue in 2020.

“Over the past few years we’ve significantly strengthened our balance sheet and we’re now able to draw on that strength under what are exceptional circumstances,” Qantas Chief Executive Alan Joyce said in a statement.

Qantas has cut all international flights and put two-thirds of its 30,000 staff on leave but so far has maintained its investment-grade credit rating.

It is continuing with a costly program to upgrade the interior of its grounded Airbus SE (PA:AIR) A380 super-jumbos, in an expression of confidence demand will eventually return to normal.

Other airlines in the region are also looking at ways to raise cash beyond government aid.

Korean Air Lines Co Ltd (KS:003490) said on Wednesday it would seek to raise funds by selling non-core assets, as it announced a pay cut of up to 50% for all of its executives.

Singapore Airlines Ltd (SI:SIAL) said on Monday it was in talks with several financial institutions over future funding needs after having drawn on credit lines.

NOT BUSINESS AS USUAL

Cash-strapped Virgin Australia Holdings (AX:VAH) said on Wednesday it would stop 90% of its domestic flying in addition to a freeze on international flights and put 80% of its 10,000 employees on leave.

Virgin is also looking to close its New Zealand cabin crew and pilot bases and its pilot base for low-cost arm Tigerair Australia in Melbourne, in a sign it would not return to business as usual when demand returns.

“We plan to return Tigerair Australia and Virgin Australia to the skies as soon as it is viable to do so. However, I am mindful that how we operate today may look different when we get to the other side of this crisis,” Virgin Chief Executive Paul Scurrah said in a statement.

Air New Zealand Ltd (NZ:AIR), which plans to cut up to 30% of its staff, has also warned it could re-emerge as a smaller airline once the coronavirus situation subsides.

Other Asian carriers have deepened capacity cuts, with Thai Airways International PCL (BK:THAI) on Tuesday cancelling nearly all of its international flights as demand for travel slumps amid the coronavirus outbreak.

Japan Airlines Co Ltd (T:9201) said on Tuesday it would cut flights on international routes from the country by about 64% between March 29 and April 30.

Boeing Co’s (N:BA) chief financial officer said that on Tuesday the U.S. aerospace industry urgently needs credit to cope with the coronavirus pandemic but that “markets essentially are closed” to new debt.

U.S. lawmakers are nearing agreement on a $61 billion rescue package for the aviation sector that would include $25 billion in payroll grants for passenger airlines weathering a sharp falloff in travel demand amid rising coronavirus outbreaks, three people briefed on the matter said.

Data firm Cirium on Tuesday estimated the number of aircraft placed in storage since January had climbed to 3,500 – up 1,000 from a day earlier – as more airlines ground planes.

Taxiways, maintenance hangars and even runways at major airports are being transformed into giant parking lots.