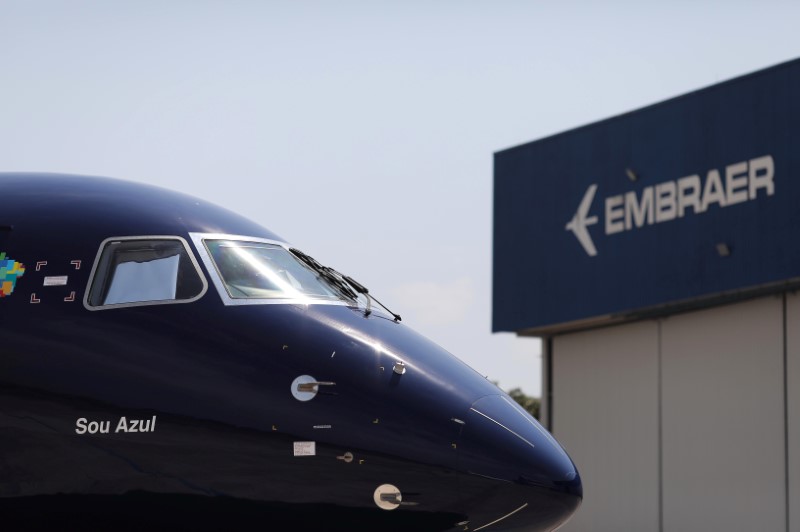 PARIS/SAO PAULO/SEATTLE (Reuters) – Brazil has upheld proposals by Boeing Co (N:) to buy the jetmaking arm of Embraer (SA:), but plunging markets have raised urgent questions over the fate of the $4.2 billion deal as aviation reels from the coronavirus crisis.

A slump in Embraer shares and cash concerns at Boeing driven by the impact of the coronavirus on air travel dealt a blow to the deal’s fragile economics, however, compounding uncertainty caused by delays in winning European Union regulatory approval.

Shares in the world’s third-largest planemaker fell 14% on Wednesday, giving it a market value of about $1.3 billion after falling by two thirds since the deal was first aired in 2018, according to Refinitiv Eikon data.

At such prices, Boeing would gain control of the commercial unit of Embraer but only after paying three times the value of the whole company, which also makes military and business jets.

Boeing has offered to pay $4.2 billion in cash for 80% of Embraer’s commercial unit, which builds jetliners in the 70- to 150-seat segment and competes with the Canadian-designed A220 program recently acquired by Europe’s Airbus.

Recent trends “have increased the chances that this deal does not get done,” Canaccord Genuity analyst Ken Herbert said.

At stake is a key plank of Boeing’s strategy for expanding its engineering and industrial base just as it faces talks over $60 billion of U.S. support for the U.S. aerospace industry.

Embraer plans to pay a $1.6 billion special dividend to its shareholders out of the proceeds from the transaction.

After allowing for taxes, the plan would place Embraer’s commercial arm led by John Slattery in a new Boeing-led venture competing with Airbus’s A220 and keep aside some $1 billion of net cash for Embraer’s remaining defense and private-jet units.Embraer’s battered market value threatens to upend those calculations, barring an unlikely decision to forego the special dividend or saddle the old Embraer with debt, analysts said.

Boeing’s new chief executive, Dave Calhoun, said in January he was committed to the deal. He must now convince Boeing’s board to pursue it while also facing critics in Congress who are questioning how potential U.S. taxpayer funds would be deployed.

“They are going to Washington with their hands out for a bailout and then on the other hand looking at spending $4.2 billion to complete the deal,” Herbert said.

“We don’t comment publicly on discussions between the parties or market speculation. We are addressing the regulatory approvals process and outstanding closing conditions,” a Boeing spokeswoman said.

Embraer’s options should the deal fail have not been widely discussed and potential alliance partners are scarce.

Before the health scare hammered markets, some airlines had urged the EU to lift what then seemed the only serious obstacle to the deal, fearing Embraer’s jetliner business would struggle on its own now that Airbus owns a competitor.

But Embraer has expressed confidence in its portfolio and continues to push hard to market its latest plane, the E195-E2, which it showcased in England this week.